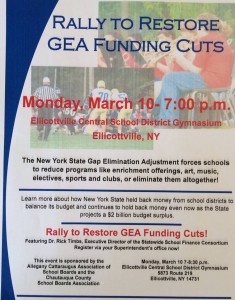 Over the past several days I have been in Albany with my superintendent colleagues from across the State of New York. On Tuesday we attended lobby day where we met with our legislators to try to influence them in the State Budget process. There’s a significant problem in education funding and it’s called the GEA (Gap Elimination Adjustment). The purpose of this post is to help everyone understand what’s happening in our State with regard to education funding and how it impacts us here at Randolph.

When you first read the words Gap Elimination Adjustment, it sounds like the governor is eliminating a gap in funding for schools, right? In fact it’s just the opposite. It was to help to eliminate the gap in the State budget. Only problem? The governor has been all over the media discussing the surplus he’s got now.

Basically the governor proposes how much state aid each district is entitled to and then he subtracts an amount from that figure. For example, his proposal for aid to Randolph this year (which includes about 16 different aid categories) is $12,708,810 (last year it was $12,910,111). His proposal then eliminates $435,199 of that aid. To further complicate the issue he then proposes a Gap Restoration of $163,231.

Now please consider the 2.0% tax cap making it so districts cannot raise the tax levy (this is the portion of the school budget that the local taxpayers fund) more than the cap. As you’re already realizing nothing is simple in school finance and the cap is similar. Randolph Central technically is permitted to raise taxes 3.6% this year under the cap but we would be unlikely to go beyond the 2.0% anyway. For this discussion, let’s consider the 2.0% which is $94,834.

What do you think is the greater financial concern for our district-the tax levy cap or future state aid levels? We aren’t a wealthy district from down state who raises the majority of our revenues through the taxation of our property owners. The School Funding Fairness in New York State report by Bruce D. Baker, Rutgers University, lists Randolph Central as one of 50 Districts in NYS with the largest formula funding shortfalls per pupil in 2013-14. We will have a shortfall of $271,968 under the governor’s proposal because of the Gap Elimination Adjustment. Raising taxes isn’t the answer and the burden on our local taxpayers is already high enough. That’s why we’ve worked hard to make cuts and to keep our expenses in check, so that we could deliver a budget to our taxpayers that included NO tax increase for the past five years.

Over 70% of districts are still receiving less state aid than they received in 2008-09. We have worked hard to use our excess reserves to meet the increases in our budget year after year. Luckily it’s taken us longer to reach the point of cutting programs or positions than most districts in NYS. We can attribute that to prudent financial management and planning.

BOE President Michael Evans explains the position of the Board of Education,

In our district we have a veteran team of school administrators and board members most with tenures extending over 15 years of involvement in the NYS education system.  David Chambers has led the district’s financial management efforts for over 22 years. Other veteran players involved include Superintendent Kimberly Moritz, and past Presidents David Adams and Louise Boutwell. We have been prudently trimming back on our fund balance and by using the monies held in the various reserve funds but, please understand we intend to continue to manage much the same as we have over the past many years. We do not intend to manage our local district finances the way the state or federal government have managed their own. We believe a general fund balance and prudent reserves are the common sense approach to managing given turbulent state and national financial situations.

On Monday, March 10, from 7-8:30 p.m., Southern Tier districts will join together in the Gymnasium of the Ellicottville Central School District, 5873 Route 219, Ellicottville, New York, to host “Rally to Restore GEA Funding Cuts.” The event will feature an overview of the crisis from fiscal expert Dr. Rick Timbs, Executive Director of the Statewide School Finance Consortium. Our intent is to highlight the looming educational crisis in our region and to kick off a season of citizen advocacy to address it.

We’ve done everything that’s been asked of us as expenses continue to increase and we’ve done so at 2008-09 state aid levels. Please join me at the Rally on Monday so that we can impact the thinking of the politicians who are making the decisions about 70% of our school budget.