I learned of the death of Larry Wells, a young man who I had the great privilege of teaching at Pine Valley in the 1990’s, via the local news and social media. Later this afternoon, I will attend his wake at a Forestville funeral home. I’m writing today to remember him as I knew him, not as the victim of a violent crime as has been widely reported. 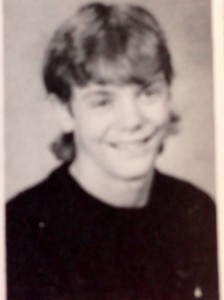 When I was a young, first year teacher at Pine Valley Central School in 1990, Larry Wells was a member of my seventh grade class. As a Spanish teacher in a small district, I then taught that incredible class for four years to follow. If you’ve never attended or taught in a small rural school district, I’m guessing it may be hard to imagine what it’s like.

The students know each other, and all of us as the adults working with them, extremely well. I remember entering those classes with my teaching materials on a cart as I taught in various classrooms and had hardly a clue as to what I was doing. Clutching my college notebook, I greeted my seventh graders with the best that I knew–and it wasn’t enough. They were an energetic, close knit handful and I didn’t yet have the skills to teach them well. Luckily, I attended some excellent staff development training early on where I learned cooperative learning techniques. I returned to school the next day, took each class out into the hallway and said to them, “what I’ve been doing wasn’t good enough. From this day forward we’re going to re-enter that classroom and try something new”. They became accustomed to my efforts through four years of classes with me (what a privilege to teach them for four solid years!) and would often remark, “oh no, she’s been to another conference, here we go!”

This was quite a crew, heavy on boys who couldn’t have cared less about learning Spanish. They were all about football from long before I taught them in seventh grade and eventually the boys went on to win the Class D, Section Six Championship. Larry Wells was an integral part of this class and that team. When considering my teaching strategies, I tried anything I could think of to connect my content to football–including elaborate peer tutoring ‘games’ for review that I linked to football.

Larry Wells was one of the best of the bunch. And his wife, then girlfriend Jill Lucas, was too. Larry and Jill were bright, friendly, caring and involved in everything. They were never in trouble, the class couple, devoted to one another. Mostly they joined me in laughing along at the antics of their classmates. Who could resist the humor of Richie, Max, MJ, Michael, Brent, Shawn, Justin or Tim?! Josh Roth and Larry Wells were never at the center of it, but they certainly enjoyed the fun as much as I did. And Jill was blessed with a great group of girls in that class too–girls who were about the only thing that kept that bunch sane. 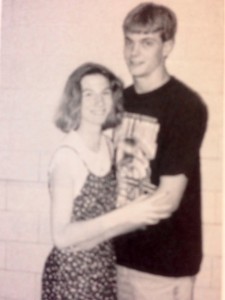 I miss that class. I’ve never known a group of students better or hoped more for them. In my mind’s eye, they’re all just the same as they were ‘back in the day’ at Pine Valley. And something like what happened to Larry should never have happened. Not to him. Not to any of them.

Working in education for 24 years now, I’ve suffered the tragedy of losing students. The loss of Larry Wells to his family, to his coworkers, and to his friends is devastating. For the family that we were as a faculty and the Class of 1996, we grieve too.

All of my love, thoughts and prayers to Jill Lucas Wells and Larry’s loved ones. You are not alone, we stand with you in honoring and remembering one of the best kids I’ve ever known, Larry Wells.