Updated August 9, 2017: I’m headed to the SGI Coaches’ meeting held with our Athletic Director Joe DeMartino this morning and I’m thinking about this post from 2012. Seems worth publishing again, given our Fall sports season kicking into gear. It’s five years later and I believe that it’s these lessons that have served our son well and led to success in his occupation today–more than anything he learned within the walls of his college classrooms.

Everything my kid needs to learn to succeed in the future, he’s learning on the rugby field. I’m sure every athlete on every athletic team in the country probably thinks that my premise is true for his sport. Maybe so. I’m just not sure I’ve seen anything quite like this before. 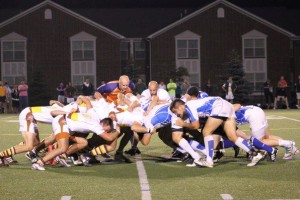 This is a team of young men so dedicated to each other, to their coaches and to their alumni that winning is the only acceptable outcome. They practice once to twice per day and the matches are grueling. Pushing through physical pain for the good of the team? Not a problem. Every man doing his job well, to the best of his ability and then some? A requirement. The technical aspects of the sport are amazing to me—including how each of those 15 men must get it right for everything to go as planned, with a check in the win column.

I cannot believe how much our son loves this team and this game. Especially given the fact that we thought he was going to play hockey at St. Bonaventure—a sport he’s played since first grade. We had barely heard of rugby when he called us three days into his freshmen year to tell us he was going out for the team. But what an ideal sport it wound up to be for our young man.

I’ve watched him learn some critical lessons on this team—lessons that will serve him well for the rest of his life. Lessons that for the most part hold true in my own work within a public school team. 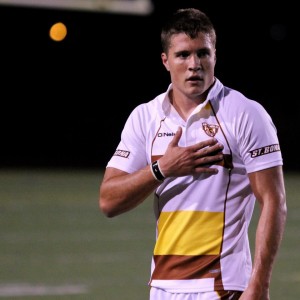 1. It’s all about the team. You can’t be selfish. Ever. That goes for everything from scoring to missing practices.

2. The alumni built this team, we owe it to them to carry on their traditions and to win. They also support us financially. Show them respect and gratitude. And aspire to be successful so we can give back in the same ways.

3. Our coaches aren’t paid to be there. They come because of their dedication to us. We owe it to them to show up and work.

4. There’s no glory, no money. We do it for each other, the coaches and the alumni, that’s all there is.

5. Every game day, every guy needs to think he’s the worst one on the field. That means working even harder so that I don’t let the rest of the team down.

6. On film day, same thing. Watching film isn’t about seeing some great play you made, it’s about  analyzing what mistakes we made so that we can avoid making them the next time.

7. We get maybe four-five years of this and it’s some of the best years of our lives. Let’s do something great to remember it well. We can see it in the eyes of our alumni, they’d give anything to be back on that field with us. Appreciate it while we’ve got it.

8. Good coaching does teach you something.  Respect what the coaches say. I thought I couldn’t catch a ball. Then I had coaches and team mates who showed me how, I practiced, I learned.

9. Hard work pays off. Starting without any knowledge of the game and hoping to play all of a B side game freshmen year can result in a starting position on A side as a junior if you want it and work hard enough.

10. Leadership means being the guy that no one wants to let down. I’d still do anything not to disappoint the guys ahead of me, guys like Nick Sylor, Nick Maurer, and Alex Brussard.

11. This sport teaches us how to be good men, not just good rugby players. We address the refs as ‘Sir’ or ‘M’am’ because of respect, it’s a brutal gentlemen’s game. As the premier Franciscan school in the country, we’re representing more than ourselves or one rugby team. Own that.

12. Our mindset is “anything for the team”–being the guy who would die for the team on the field–that’s called intestinal fortitude. That’s what separates good from great. We CAN be great.  Mental attitude is as much as physical ability.

As a public school administrator for thirteen years, I know that the lessons he’s learning on that field will equate to success in any work place. The very best members of any organization know that listening for feedback, analyzing and self assessing, hard work and dedication all lead to tremendous success. Each of us doing our part for the team, the organization as a whole, so that none of us lets the rest down? If public schools understand the concept of team, school improvement success will be a given.