My younger brother, named Ziggy (that’s a story for another time), is technically smarter than me. I know this because I contacted our school upon my graduation and obtained my school records, which included my IQ score. Then I did the same thing, as if I was Ziggy, and obtained HIS school records and his IQ score. His score was one point higher than mine. Can you tell that we grew up in a somewhat dysfunctional home in which our father was constantly comparing us and baiting us (well, me) about who was “smarter”?

We were very different students. I was the student who joined (and often led) every possible school club and activity. Why? My parents were very strict and the only things that I was allowed to participate in were school events. Ziggy is seven years younger and because of the turmoil in our parents’ lives. . . well. . . let’s just say he was parented a bit differently. He was the student who did as little as possible to get by, died his hair purple, skipped school up to the maximum days allowable and appeared on the Pittsburgh evening news because he was lobbying for a smoking lounge for students because the teachers had one (it was 1988) and so the students should have one provided too.

I went to college (to spite my dad who said he wouldn’t pay for it and that I wasn’t smart enough anyway) and Ziggy joined the Marine Corps. He worked in Marine intelligence for two decades and now has a successful career as the associate director of industrial security for a federal contractor in Washington DC. We earn about the same amount of money annually.

He was NEVER CHALLENGED in his entire school experience. When the standardized test results came back to the high school he attended, the guidance counselors were somewhat astonished that my lackadaisical, pain in the neck brother, had achieved the highest scores in his class. 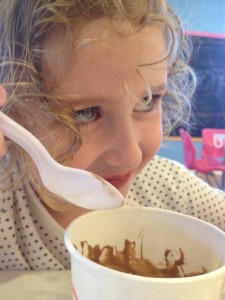 Kaylee attends first grade and she doesn’t like it. Why? In Kaylee’s own words, “It’s not as much fun. There’s homework. They don’t have a play kitchen. And the teacher talks too much.” My brother’s words, “the usual.” My sister in law’s words, “they’re doing simple spelling words like a, up, and, we and go. She’s bored.”

Now here’s the thing about her first grade teacher. She’s likely an incredible educator with such a HUGE variety of students in her class that the challenges may be enormous. If Kaylee behaves well enough, the teacher will be happy to have one less kid to worry about. In other words, Kaylee (like my brother), will likely turn out okay no matter the quality of her education. But I say, “that’s not good enough.” We need to challenge all of our students, including the best and the brightest. We need them to solve the problems of our world and to make it a better place.

We cannot afford to teach to the most needy student in the class for another generation. We have to learn to differentiate learning and to challenge every child.  And it’s most critical with our youngest students. Students like Kaylee. As our kids get older, they become accustomed to praise for good grades earned for not much effort and challenging them later in the system becomes problematic. We have to challenge them all along the way. If students are given rigorous work with high expectations, they rise to the challenge and they enjoy school more. This problem in our schools is clearly and thoroughly covered in the September 2014 publication of Educational Leadership.

It’s definitely worth spending some time studying this topic and incorporating the ideas of motivation, particularly through our expectations, into our classrooms. I’ve watched our own Randolph teachers do this over the past four years and the comments from veteran teachers who say, “I never thought my students could do this” are the most hopeful we can hear.